Hey friends, the time is here! The southeast ninjas traveled to Tacoma, Washington back in April to film the qualifying rounds for this season of American Ninja Warrior, and our episode airs TONIGHT (Monday, June 21) at 9pm/8c on NBC. Tune in to see how we did!

I’m constantly amazed and grateful for the opportunity to compete and to be a part of this ninja community. If you’d like to get your kids or yourself involved in ninja obstacle training, simply search for a ninja gym in your community. There are so many gyms popping up around the country these days tailored to this kind of training, and it is hard to find a more positive and supportive group of people to be around. A good source to check out is https://www.ninjaguide.com/. Good luck!!

And if you’re in the upstate SC area, come visit us at MOTIVE School of Movement!
Bootie

Thanks to anwnation.com for hosting my qualifying wrap-up article. 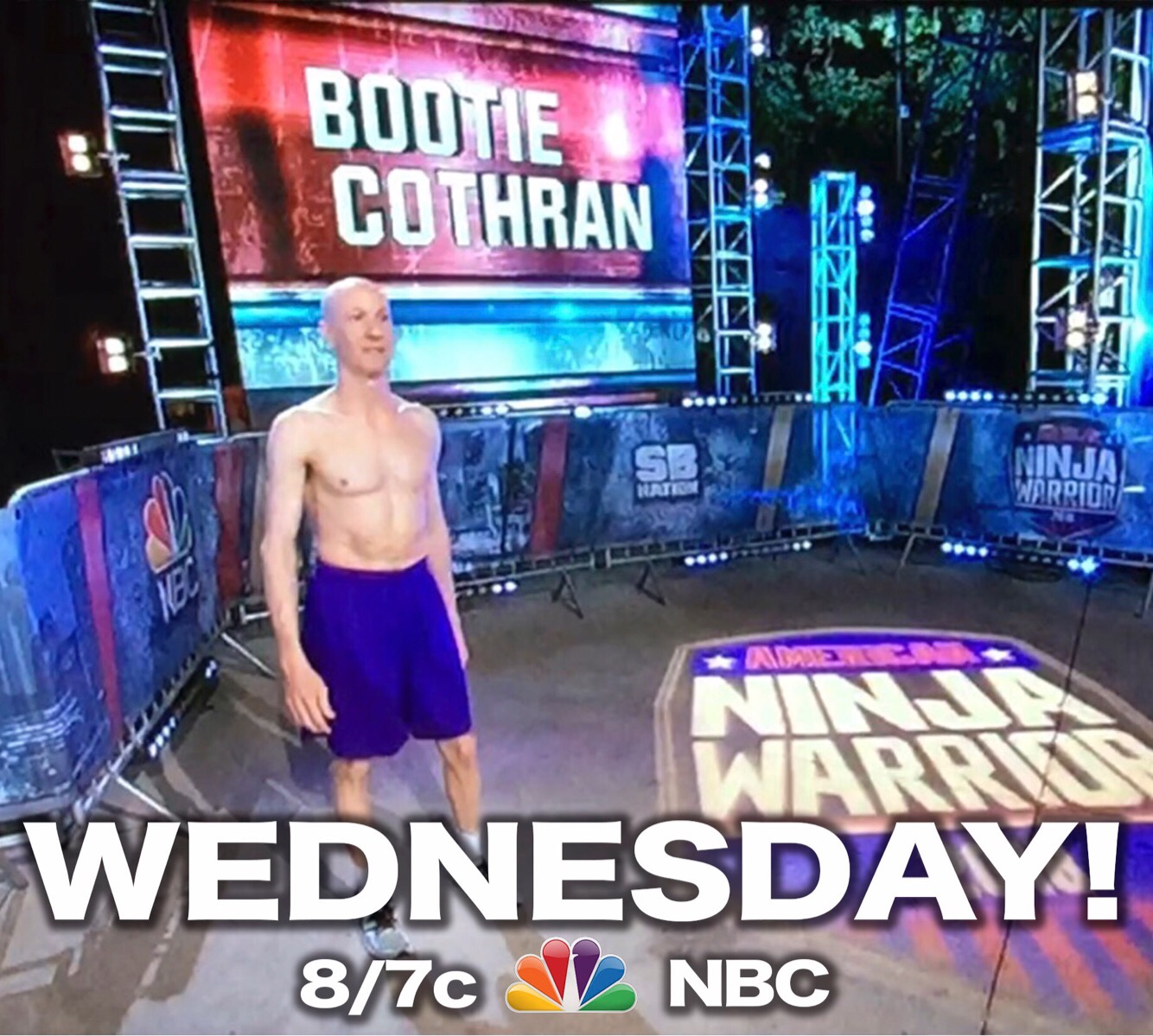 If you want to see some Bootie flying around on your TV (and who doesn’t??) watch an all-new American Ninja Warrior this Wednesday, June 13th, at 8/7c on NBC. This will be the Miami City Qualifying course, where the top 30 will advance to the Miami City Finals with a chance to also advance to the National Finals.

We filmed this back in April, and the big question everyone wants to know is, how did I do??? Well, you’ll see it all in HD video on Wednesday, June 13th, at 8/7c, on NBC. Check your local listings.

So set your DVR, put it on your calendar, write it on your hand, or do whatever it is you do when you need a reminder. Thanks for your support!

Now, here are a few ways to stay informed with all things ninja:

anwnation.com is the official fan site where they publish all kinds of behind the scenes goodies.

And here are all our other official social media sources:

I was set to sing this song this past Sunday in church, and was rehearsing on the Thursday before when my friend and colleague, Ryland Brown, came in and spontaneously added some piano to it, and it was amazing, mainly because he’s awesome like that. Ryland couldn’t be there for the performance on Sunday, so we got together yesterday and recorded it a few times. We did four takes in the studio trying to get a good, clean sound with individual tracks for the vocal and instruments, but it just felt too “sterile”, even with adding reverb and other effects. So we went into the big room (with the REAL piano) and just played it together and it worked so much better that way. This was our first take. I think it’s best with a decent pair of headphones.

I’ve always omitted the original bridge and replaced it with the ending of the 1st verse, I think, because I originally couldn’t duplicate it, vocally, and just got used to doing it this way over the years.

I took this from the warm up area, where ninjas are called about 10-15 minutes before their run. This is when it gets real.

Wow, what a ride this has been!

First, I need to point out that over 110 people ran the course in Atlanta, but not even half of those folks end up with any airtime. Each new 2-hour episode only has time to show 30-40 runners, leaving many deserving ninjas who will never get to see their run or share it with others. I wish there was a way for those runs to be shown or maybe released online, and getting those folks some recognition. I would not be in this without them as friends and fellow-competitors.

I really wanted another shot at that course for Finals night. After going through it the first time (nearly completely) I felt like I could’ve gone a lot faster on the second night, and with a lot more confidence. Here it is by obstacle:

The new steps were definitely harder than prior versions. A number of people went swimming there. I never considered trying to 1-step them. But I did feel confident I could make the jumps and move between them by just focusing and not rushing. My dismount needs some work.

I knew the big dipper was doable, but I had gone out on a pipe-slider obstacle in season 5, so that was somewhere in my mind. Still, I figured if I allowed my legs and body to trail behind me as much as possible during my descent, that would help me generate more momentum through the curve to launch to the net/platform. The mixed grip was the popular advice on this obstacle, as the straight grip might allow the bar to roll out from under the fingers more easily. The grip felt a little unnatural but I’m glad I did it.

I think the spinning cubes had me concerned the most. On an obstacle like that, you don’t have any idea how it is going to respond until you actually step on it, so you don’t know how much weight or pressure you can get away with using. Also, last season I fell on a balance obstacle with questionable footing. When I was warming up before my run, I decided my best approach here was to have my momentum moving forward as fast as possible, like trying to run across water. My bailout plan was to dive for the platform if anything went wrong. The cubes had a lot more mass to them than I expected, which added to their stability for my small size. I was across before I knew it. 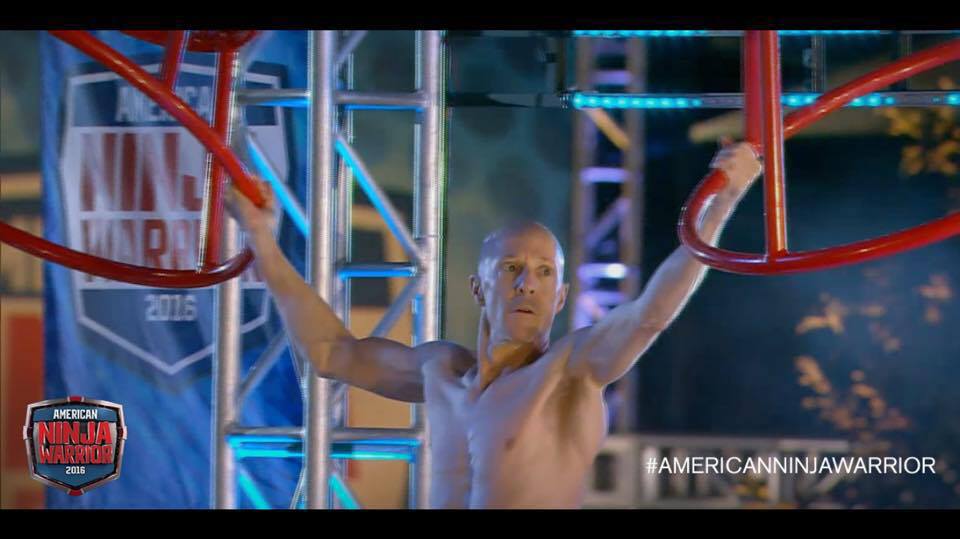 The spin cycle. I had seen these last season in another region. They looked like they’d be pretty fun, and they were! I had an idea for a more aggressive approach but was going to save that for the finals and play it more conservative in qualifying. I felt comfortable that once I got up there I could work my way through it.

The pipes. Obstacle number 5 of 6. Twenty feet away from the warped wall. My “underneath” approach on the 2nd pipe was intentional, saving my grip and arm strength by pulling the pipe to me while also advancing to the end of it, then using the swing to get to the 3rd pipe, ready to transfer to it. My first attempt would’ve been great, because if I had held that position I would’ve transferred facing forward, and able to easily transfer to the last pipe. But my second attempt put my hand on the 3rd pipe so that the transfer put me backwards. Once there, I could not figure out how to turn myself back around without losing my grip. I’d like to do that one over. I believe I would’ve gotten up the new wall.

Some of the friends and family who were there to cheer me on.

Although I didn’t hit the buzzer or make it to the finals, I had SUCH a great experience, all-around. It’s always a great time catching up with ninja friends, making new ones and just experiencing the energetic atmosphere that is there. This year, with the location being so close to home, I had a great crowd of family and friends in the stands cheering me on. Many of them were children and youth who were already big fans of the show, but for them to get to be there and see it all up close and in person was like going to the moon. After my run I got to hang out in the stands with them, have some “ninja” talk, and watch some other runners come through the course. And later I pulled some of the top-name ninjas over for photos and autographs with the kids. I really enjoyed watching their excitement of it all and being able to be a part of it.

I’d like to thank everyone so much for your support! What a crazy adventure, huh? I’m trying to figure out whose life this is I’m living. Let’s keep at it. I’ve got to hit that buzzer!

Friends, here comes season 8 of American Ninja Warrior! On Wednesday, June 1st at 8/7c., the season premier will be the Los Angeles region, and then on June 8th, the Atlanta region, where I competed, will air. Don’t miss it!

The first two weeks the show airs on Wednesdays, then moves to Mondays.

To get you warmed up, here’s a quick promo video for the new season, and a link to some of my photos from Atlanta.

This song came out of my recent American Ninja Warrior adventure in Orlando. My favorite songs are the ones that end up writing themselves – they just sort of come out on their own, from somewhere inside, and this one was no different. I wasn’t trying to write a song at the time, I was just picking on my guitar one day in early summer and this groove started coming out, and then these lyrics started coming out, so I followed where it took me and this is what I ended up with.

It’s titled “Don’t Let Go”, and it offers a glimpse into what was going on in my mind as I was running the course, but it’s about more than just that. It’s about not letting go of our goals and dreams, being unafraid to fail, using those failures as motivation to overcome our obstacles, and about hanging onto whatever figurative “rope” you’re hanging onto in life for just a little longer.

100% of the proceeds of this song will go directly to support my ninja friend Kenneth Niemitalo and his wife, whose new baby girl is dealing with some expensive health issues, so please share this post, spend an easy dollar and let’s help a brother out!

This song is dedicated to the entire ninja community, and everyone out there who is reaching for their goal or hanging onto their rope. Don’t let go!

The sound was pretty awesome in person, prob not as good in a recording but you get the idea. There’s a lot of energy tied up in this tree. It’s a Beech tree that fell completely opposite from where I was intending and it pinched my bar, then started slowly peeling back like this until the big pops.