It is becoming more and more apparent to me that, if you believe in yourself, use positive thinking, and work hard, you can bring whatever change or growth you want to your life.

5 years ago I discovered this crazy obstacle course show called American Ninja Warrior at the ripe old age of 44. When I applied that year, I dreamed of just getting a shot at running the course and trying to prove something with an aging body. I could not imagine I would be where I am today, embraced by an incredible ninja community and now competing in my 5th season, feeling stronger and more confident than ever.

Well, we recently wrapped up filming for season 10 of the southeast region in Miami, which is where it all started for me back in season 5. As always, it was an awesome experience. The show will air sometime in June (I’ll share more info as it approaches, so be sure to follow me here for the updates). But for now, here is a short wrap-up and a small glimpse into the family and the experience that is American Ninja Warrior:

The day before the comp many ninjas are called to arrive in waves at a site where we film interviews, b-roll and “hero” shots. This is often a half-day affair with a lot of sitting around and waiting, so you get to meet a lot of new ninjas and catch up with old friends. 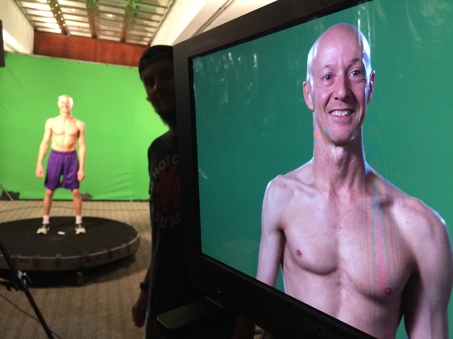 This is Nic Steinhaus! He’s a rookie on the course and also has a bunch of titanium parts inside his body and a good comeback story.

This is Natalie Duran, a popular name on the show. When I was walking up to the hotel for interview day, she came rolling up on a Harley Davidson looking like the badass she is. 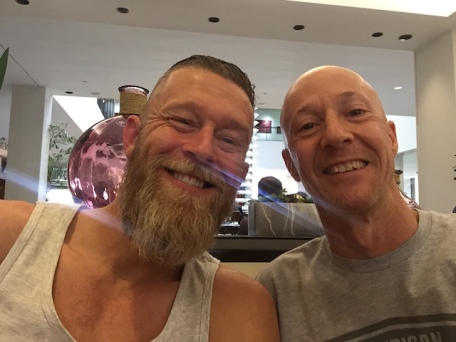 This is Morgan Wright (Moose) and he and I are representing with the older ninjas in Miami.  He’s an elementary school teacher and an overall awesome and fun guy. Like me, he’s a veteran who comes into season 10 having never hit a button.

Dougie-Fresh and Kelley and family! They’re are expecting twins, who are already on the #BootieBandwagon! Dougie and I first met in Orlando in season 7 and were shown back-to-back in the Qualifying episode.

This is Matt Barclay. We met at a local ninja comp in Atlanta a couple years ago as he was in the process of getting involved in the ninja world, having worked really hard at getting healthy and into shape for applying to the show. I love these kinds of stories, seeing people challenging and believing in themselves, working hard and being empowered by the results.

This is Bree!! We met and ran together last year in Daytona, and yeah, she’s scary strong!! 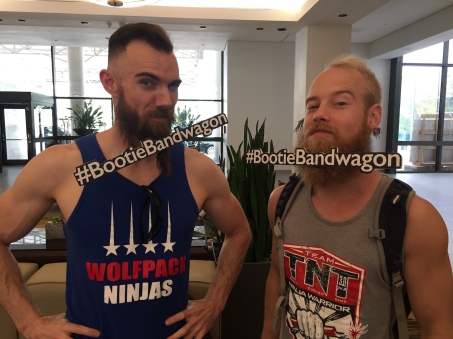 Ryan and Brett are longtime friends, former roommates, and have been on the show since it began 10 years ago. Their beards are almost as legendary as their skills, and yeah, they’re on the #BootieBandwagon, too.

On the day of the competition, we show up for check-in where we find out what number we are running. That’s region 3, runner number 28.

Mike Cook operates Ultimate Backyard Warrior (UBW) in Rocky Mount, NC, and hosts 2 major ninja events each year that bring in ninjas from all over the country.

This is Joel, a former F15 fighter pilot who has battled against cancer and is out here taking on his next challenge. 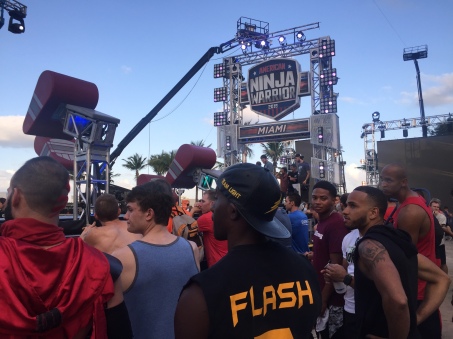 Once all the ninjas have checked in, we gather at the start of the course to go over the rules for each obstacle, watch a single demonstration and ask any questions. We do not get to practice or touch the obstacles before our run. 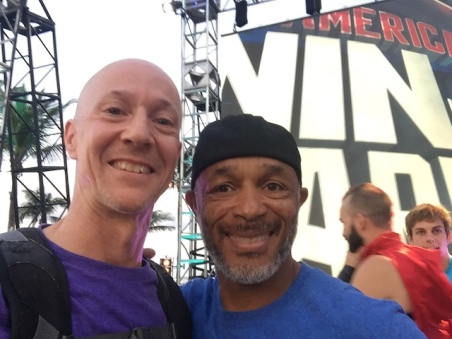 This is Glenn Davis, one of the owners of NinjaQuest in Marietta, GA. He’s a former gymnast and a creative and talented obstacle builder. He spent the past 2 seasons testing the courses in Daytona and now Miami. (Testers are used so producers can be sure the obstacles are not too hard but also not too easy!) 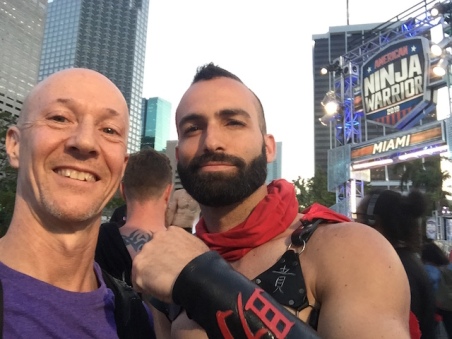 This is Reko Rivera, a DJ, entertainer and fire-blower who I first met in season 5. We’ve competed together at every ANW event I’ve been a part of, as well as some local competitions. 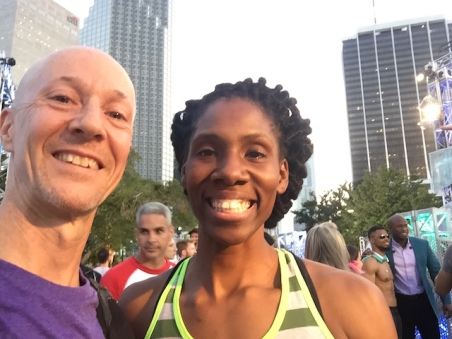 This is Jessica Clayton. We first met at a local competition in Atlanta a few years ago. She works at NinjaQuest Fitness in Atlanta and is a beast on any course. 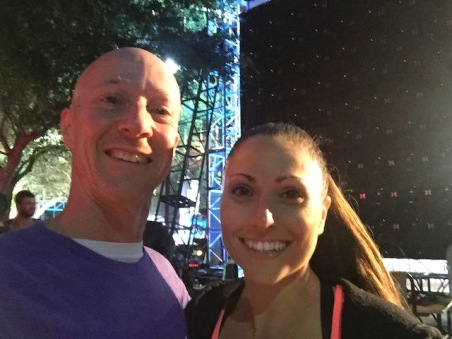 This is Colleen McCormack. We’ve been together at a lot of ANW and local competitions, but perhaps our most fun memory was from season 8 in Atlanta when we shared the best Uber ride ever with Justin Mania to Slingshot Entertainment the night before filming.

Chuck Mammay, “The Chuckster”, competed in seasons 8 and 9 at over 70 years old. He’s well-known and loved!

Brick!! This is Steven Brickhouse, who was featured in season 8. I see you, Brick!

Here’s Nic Steinhaus again waiting his turn to step up to the platform on qualifying night. This is the moment everything comes down to, and it’s intense!!

I met Kevon White at B-roll and interview filming. This was his first year competing. He played football in college and was here looking for a new challenge. Great meeting you, Kevon!

This was me trying to get some rest after my qualifying run. 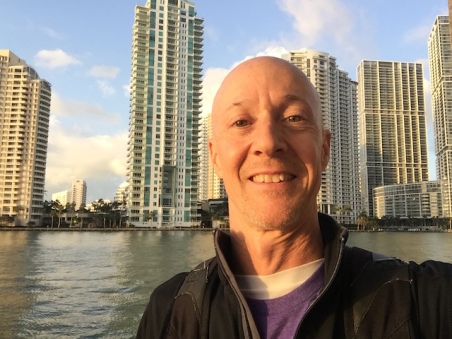 The morning after the qualifying night, headed back to my hotel after breakfast (the show is filmed all overnight to get the production value of having the dark backdrop and lights).

After the break for lunch, here are Matt, Akbar, JJ Woods and Barclay Stockett filming a promo for Ninja vs Ninja, which airs on USA Network on Mondays at 11pm. Check it out!!

This is Kip, and he was one of the testers for the course. He got to play on pretty much the entire course as they were setting it up and making adjustments, and crushed nearly everything he touched! We ended up on the same flight out on Sunday afternoon. Great hanging with you, brother! 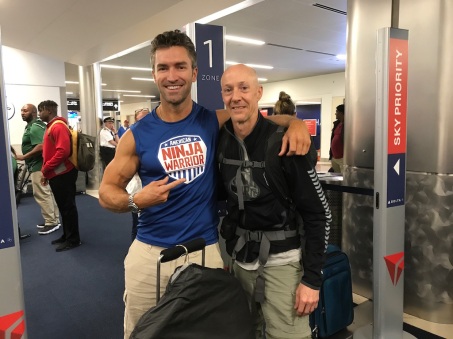 Here’s Joel again in the airport. He shared the same flight out with me and Kip.

This is part of the crew that came to support me in Miami. I am so grateful for their support! Mom, dad, Jodi, Donovan, Nia and Logan, John and Meghan and Eric and Charlie!

Those are just a small group of photos from a much larger family. Stay tuned, more to come! The new season begins May 30th on NBC at 8/7c, so don’t miss it!!

The sound was pretty awesome in person, prob not as good in a recording but you get the idea. There’s a lot of energy tied up in this tree. It’s a Beech tree that fell completely opposite from where I was intending and it pinched my bar, then started slowly peeling back like this until the big pops.