Hey friends! Season 9 of American Ninja Warrior is currently in production, and, despite the flu trying its best this week to crash my invitation, I’m headed to Daytona in a matter of days with 100+ fellow-ninjas from all over the to southeast to compete for a chance at total victory. Here’s all the info you need to know about everything ninja at this point in the year:

American Ninja Warrior – Season 9:
The Los Angeles and San Antonio regions have already wrapped up filming. Next up is the southeast region in Daytona, Florida, followed by Kansas City, Missouri, then Cleveland, Ohio, and Denver, Colorado rounding out the regions. The top 15 competitors from each region will move on to compete in Las Vegas in June, along with a handful of wildcard recipients.

This year over 77,000 applications were submitted for American Ninja Warrior, so everyone who got one of those coveted golden callbacks feels incredibly fortunate. The season 9 premier is on June 12 at 8/7c on NBC. Check out the recently-released trailer here:

Team Ninja Warrior – Season 2:
What?? You’ve not heard of Team Ninja Warrior?? Well last year it was on the hard-to-find Esquire Network (now impossible to find), but this year it has a new home on the USA Network and you have no excuses! This exciting spinoff show pits your favorite ninjas against each other as they race on identical courses, side by side, with Matt and Akbar bringing you along with the action. Season 2 premiers in just a couple of weeks, on Tuesday, April, 18th at 10/9c on USA. Catch the trailer and photos here:

FREE T-Shirts!
I’m celebrating my new .ninja domain name by giving away 3 FREE #BootieBandwagon T-SHIRTS to new followers! To enter, just follow my blog here and/or my social media accounts below. The more you follow, the better your chances to win!

Enter your email address and click the “Follow” button at the top of the sidebar on this or any page of my site (or on a mobile platform look for the follow link at the bottom when you scroll).

I’ll draw 3 winners from all those sources on May 1st!

Important Ninja Links:
To keep up with all the latest Ninja Warrior news, follow the official site fan site of American Ninja Warrior at www.anwnation.com and the social media links below. Nikki and her crew do an incredible job of supplying folks with all the inside scoop on everything “ninja warrior”!

See you on the course!!

I was set to sing this song this past Sunday in church, and was rehearsing on the Thursday before when my friend and colleague, Ryland Brown, came in and spontaneously added some piano to it, and it was amazing, mainly because he’s awesome like that. Ryland couldn’t be there for the performance on Sunday, so we got together yesterday and recorded it a few times. We did four takes in the studio trying to get a good, clean sound with individual tracks for the vocal and instruments, but it just felt too “sterile”, even with adding reverb and other effects. So we went into the big room (with the REAL piano) and just played it together and it worked so much better that way. This was our first take. I think it’s best with a decent pair of headphones.

I’ve always omitted the original bridge and replaced it with the ending of the 1st verse, I think, because I originally couldn’t duplicate it, vocally, and just got used to doing it this way over the years.

Hey friends! The time is almost here!!! I’m just a little bit excited! Here is pretty much everything you need to know while watching for me on #AmericanNinjaWarrior this Wednesday night, June 8th on NBC at 8/7c! 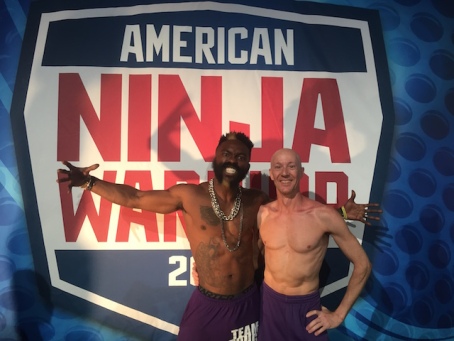 Me and Dougie! We met in season 7 in Orlando and were both featured in the Orlando qualifying episode, back-to-back. And the shorts match perfectly!!

Lastly, if you are pulling for me on Wednesday night, please take a photo of you and your friends in front of the TV and post it to Facebook, Instagram or Twitter with the hashtag #BootieBandwagon

If you have a question I can answer about American Ninja Warrior, post it in the comments and I’ll address it!

Thank you SO much for your support!!

A few recent #nature pics.
Happy birthday Rusty! And since we don’t know when Jack’s birthday was, we’ll make it today too. Cat pics all around.